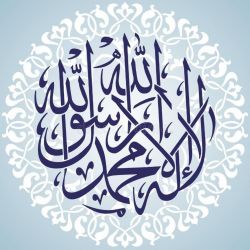 Imaan is like an engine you need to refuel it regularly in order to keep on going!
Audio / video call
You can’t call yourself ...

DID YOU READ A PORTION OF QURAN TODAY?

If YES. Allhamdulillah. May Allah ﷻ bless you and give you strength to read more ❤️

If, NO! Make sure you don't sleep without doing it & make it a daily habit to spend time with the book of Allah ﷻ each day.

"If our hearts were truly pure, we would never get enough of the Words of our Lord, and I would hate for one day to pass with me not looking in the mushaf." 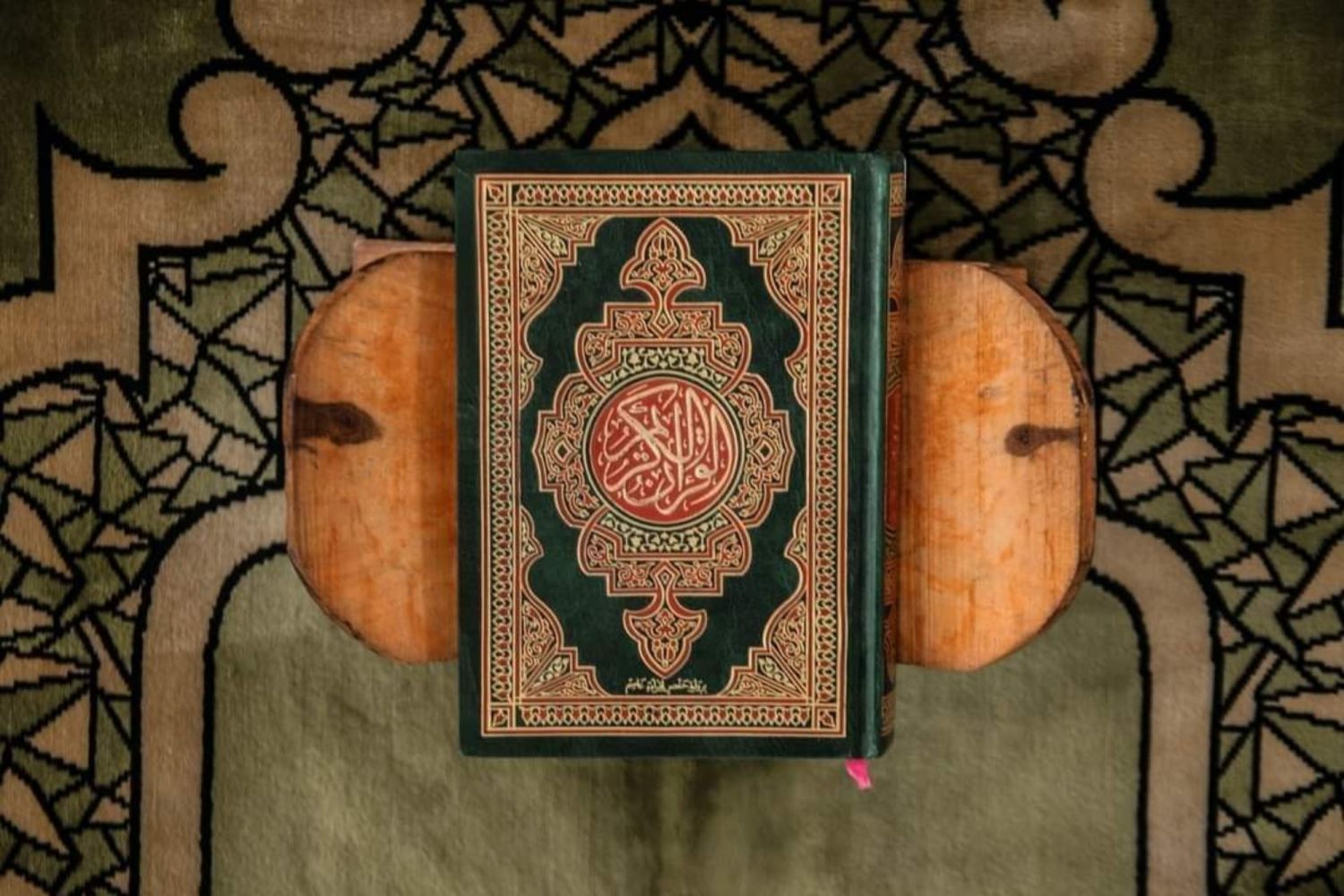 Over 1400 years ago, when a child was born, the Prophet ‎ﷺ made it his Sunnah to take a small part of a date and place it in his mouth. He would then chew it until it was soft and then rub it onto the palate of the new born baby. This is called Taḥnīk.

'Today', BBC News has reported that "experts" have said - "A dose of sugar given as a gel rubbed into the inside of the cheek is a cheap and effective way to protect premature babies against brain damage."

This is why Muslims follow the Sunnah of the Messenger of Allāh ‎ﷺ without questioning it. Science is only now discovering a tradition that was introduced 1400 years ago because Islām was and still is the forefront of development. 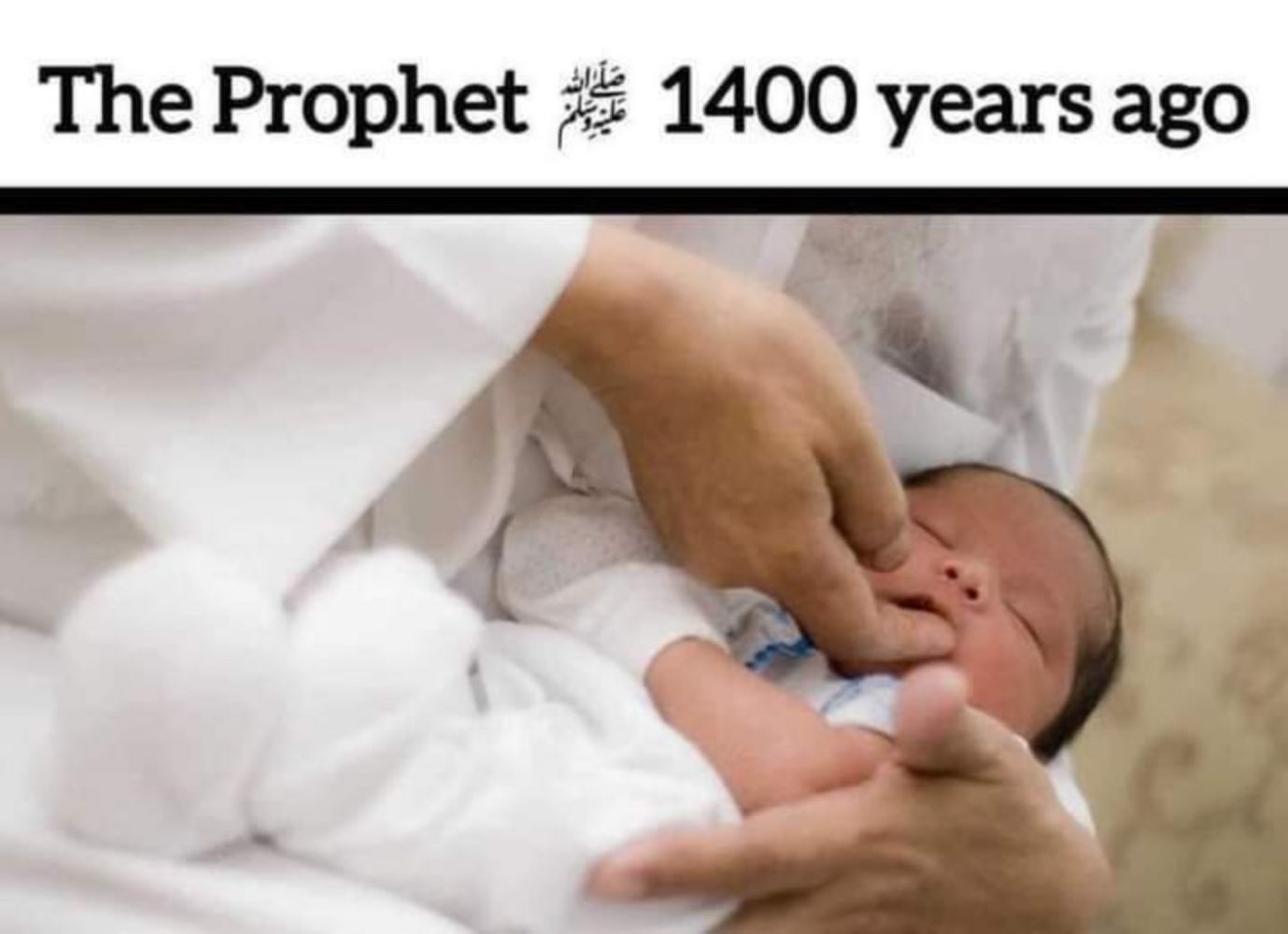 Zakat is one of the five pillars of Islam on which the foundations of the religion stand. It refers to the giving of alms to the poor and needy among the Muslim Ummah. It is obligatory on every adult Muslim who owns a specific amount of wealth and/or savings.

Zakat is the amount of money that every adult, mentally stable, free, and financially able Muslim, male and female, has to pay to support specific categories people.

The obligatory nature of Zakat is firmly established in the Qur'an, the Sunnah (or hadith), and the consensus of the companions and the Muslim scholars. Allaah states in Surah at-Taubah verses 34-35:

"O ye who believe! there are indeed many among the priests and anchorites, who in Falsehood devour the substance of men and hinder (them) from the way of Allaah. And there are those who bury gold and silver and spend it not in the way of Allaah. announce unto them a most grievous penalty - On the Day when heat will be produced out of that (wealth) in the fire of Hell, and with it will be branded their foreheads, their flanks, and their backs, their flanks, and their backs.- "This is the (treasure) which ye buried for yourselves: taste ye, then, the (treasures) ye buried!"

It is agreed between Muslims in all the centuries the obligatory nature of paying Zakat for gold and silver, and from those the other kinds of currency.

When is Zakat Due ?

1. Passage of One Lunar Year:

Zakat is obligatory after a time span of one lunar year passes with the money in the control of it's owner. Then the owner needs to pay 2.5% (or 1/40) of the money as Zakat. (A lunar year is approximately 355 days).

The owner should deduct any amount of money he or she borrowed from others; then check if the rest reaches the necessary nisab, then pays Zakat for it.

If the owner had enough money to satisfy the nisab at the beginning of the year, then the money increased (in profits, salaries, inheritance, grants...etc.), the owner needs to add the increase to the nisab amount owned at the beginning of the year; then pay Zakat, 2.5%, of the total at the end of the lunar year. (there are small differences in the fiqh schools here)

Each Muslim calculates his or her own Zakat individually. For most purposes this involves the payment each year of two and a half percent of one's capital. (Zakat Calculator)

A pious person may also give as much as he or she pleases as sadaqa, and does so preferably in secret. Although this word can be translated as 'voluntary charity' it has a wider meaning. The Prophet said 'even meeting your brother with a cheerful face is charity.'

“Do not withhold your money, (for if you did so) Allah would with-hold His blessings from you”

In another hadith, with respect to the importance of Zakat, Abu Hurairah (RA) narrated:

Allaah's Apostle said, “Whoever is made wealthy by Allaah and does not pay the Zakat of his wealth, then on the Day of Resurrection his wealth will be made like a bald-headed poisonous male snake with two black spots over the eyes. The snake will encircle his neck and bite his cheeks and say, 'I am your wealth, I am your treasure.

The idea behind giving Zakat is that of purifying your wealth and property and giving some away in the name of Allaah Almighty who is the Most Merciful and Benevolent. In the Quran, Allah says:

“[Alms are] for the poor who have been restricted for the cause of Allah, unable to move about in the land.

“The alms are only for the Fuqara (the poor), and Al-Masakin (the needy) and those employed to collect (the funds); and to attract the hearts of those who have been inclined (towards Islam); and to free captives; and for those in debt; and for Allah’s cause, and for the wayfarer (a traveler who is cut off from everything); a duty imposed by Allaah. And Allaah is All-Knower, All-Wise.”

Zakat is payable on the amount of savings and wealth left after expenditure for subsistence. This amount is known as Nisaab, which must be equivalent to 85 grams of gold or 595 grams of silver. In consequence, 2.5% is the amount of money which has to be given as Zakat. However, calculating the amount of Zakat on different kinds of assets is a lengthy task.

For your convenience, you should set a date each year around which you must calculate your Zakat. Zakat is payable on silver, gold, cash along with merchandise that is brought for business. Hence, when the date arrives, you should add up all the payable assets subtracting any debts or current expenditure. The 2.5% is to be paid on whatever assets remain after deduction. Zakat is payable on what remains saved on that particular date (and not on what is spent), making income irrelevant for the purposes of Zakat.

If you are confused as to how you calculate Zakat or what items should be included when making calculations, use Zakat calculator by IslamicFinder.

In the Quran, time and again Allaah says:

“Eat from their fruits, and give the due alms on the day of harvest.”

There is much emphasis on giving to the needy and poor and each year. Hence if we pay our Zakat on time, we can include these sections of society and play an active part in bettering their conditions, that too in the name of Allaah Almighty. 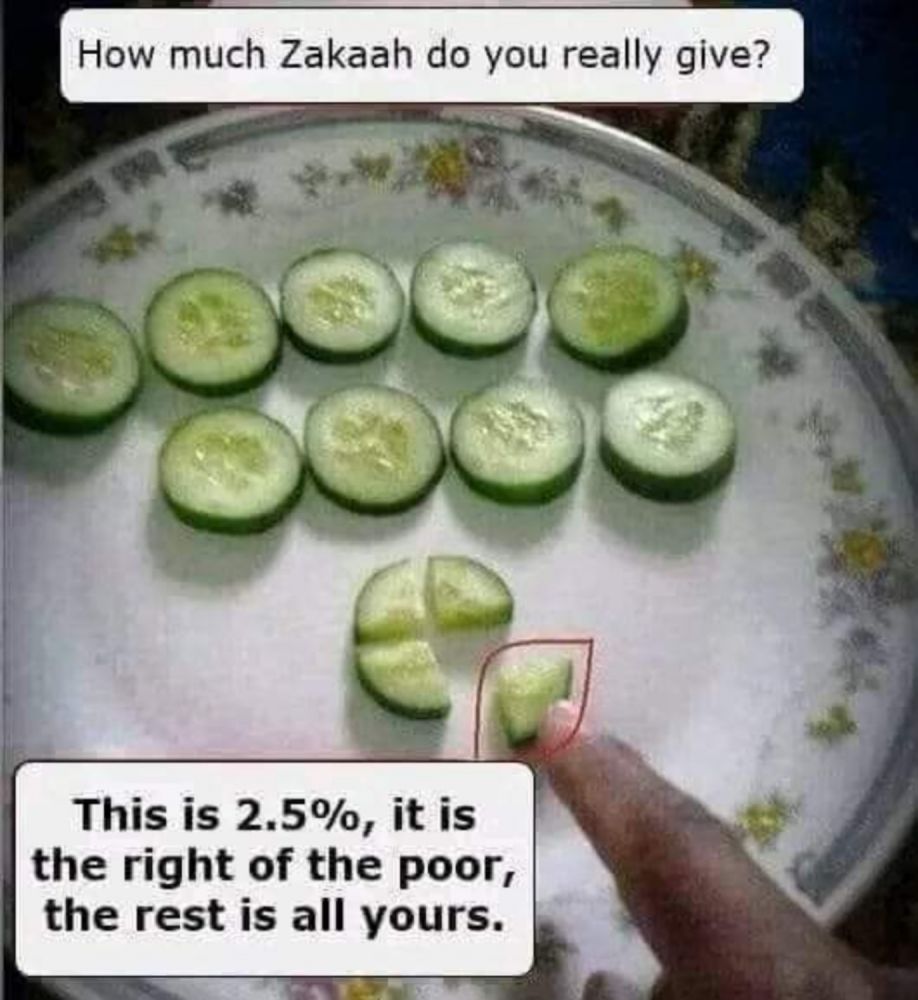 1. You wear abaya and hijāb but with perfume and makeup. ( a leaking bucket )

2. You’re following the Sunnah and have a beard but you don’t lower your gaze. (A leaking bucket)

3. You pray all of your prayers on time but you have no khushū at all. (A leaking bucket)

4. You’re very kind to people and speak with them gently but with your family you’re always harsh. (A leaking bucket)

5. You honour and treat your guests well but when they leave, you gossip about them and talk about their flaws. (A leaking bucket)

6. You give alot of sadaqah to the poor but you humiliate them and hurt them. (A leaking bucket)

7. You stand up for tahajjud at night, fast and reads Qur’ān everyday but you cut your family ties. (A leaking bucket)

8. You fast and have sabr for the pangs of hunger and thirst but you swear, insult, curse. (A leaking bucket)

9. You help others but you’re doing it to gain something from them and not doing those acts of kindness for the sake of Allāh’s Glory. (A leaking bucket)

10. You post reminders and have thousands of followers on facebook and instagram but you’re doing it for the fame, not to please Allah. (A leaking bucket)

Do not gather all your good deeds in a leaking bucket.

You struggle to fill it whilst it easily runs out through the leaking holes!

May Allāh make us do all of good actions for pleasing HIM alone and may HE be pleased with us always. Alahumma Aameen 🤲❤️🤲 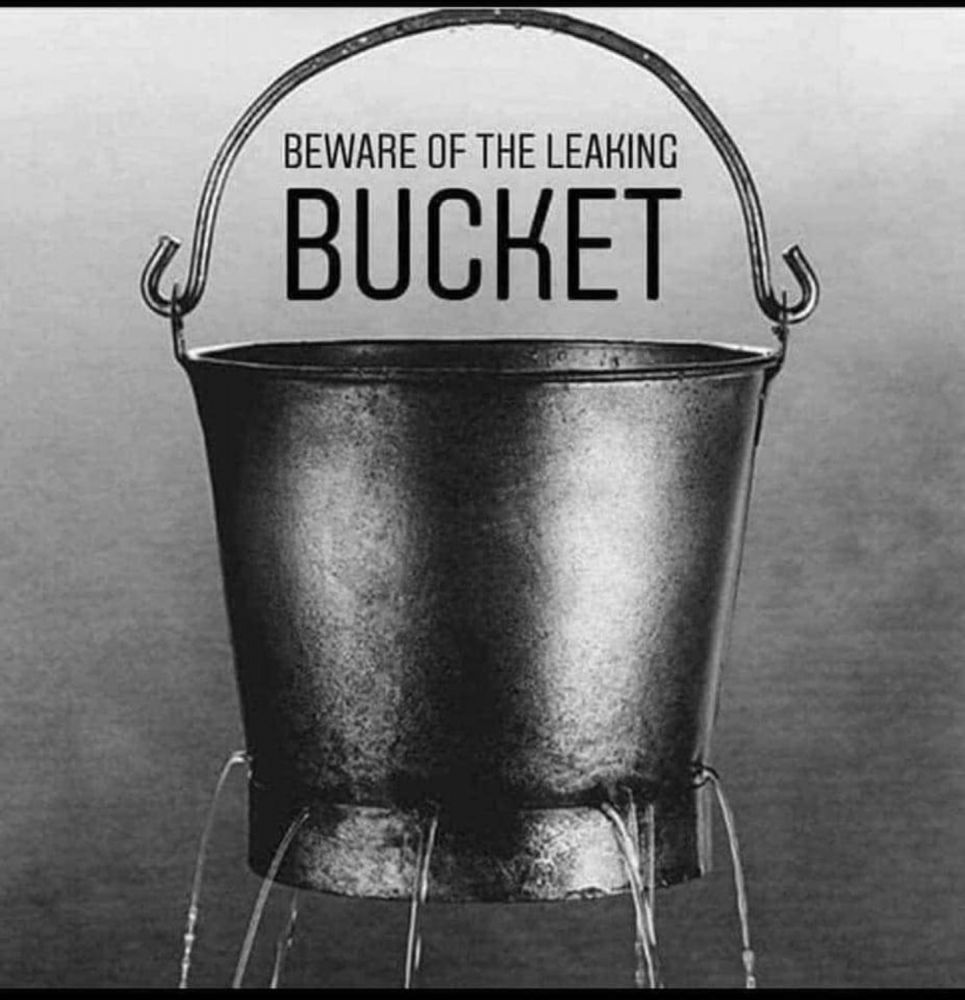 Your message has been sent